Welll … that’s kind of an overstatement.

I didn’t break the finish line glory or anything, but I got 1st place in my age group (19-24) and 6th place overall in the Capital Striders Capital Pursuit 5K.

Don’t look at me like that.  I don’t normally do short distance, but instead of sitting at home and sleeping I thought I’d rather be out running. Or at least on Friday I decided that on Sunday I’d rather be running than sleeping.  When I got to Sunday I realized I was mistaken.

I forced myself out of bed and decided I was going to run it to accomplish something and not try to go too hardcore into it. So I made myself a killer playlist of 25 minutes’ worth of power songs, suited up and went out.

I had no idea how to start a 5K and I was afraid of starting too fast (which I did) but I allowed myself to slow down in the middle a bit so I could go hard in the end.

Did I mention there was what looked like a 9-year-old kid in front of me?  As in, I’m getting beat by a 9-year-old and I have a side cramp and OHMYGOD I want to go back to bed.

But, I powered through.  I ran a flipping marathon.  There’s no way I was going to let this kid beat me at a 5K.

Anyway, I set out to at least run this thing in under 26 minutes. I was near the end and hadn’t checked the time on my iPod (it psyches me out, so I don’t if I’m racing). I saw the clock and it looked like it said “24-somethingorother”.

Crap. I’m not going to make it. Screw you 9-year-old. I’ll catch you later. I’m slowing down.

Not lightening speed or anything, but that is pretty fast. For me especially.

So I grabbed a banana (since I like those now), a bagel bite, and some Gatorade, and got in line to be stretched out by the local med students.

WHY did I never take advantage of the stretchage before? Wow. Does wonders.

After my snack-n-stretch, I noticed they were posting the results so I took a peek. I usually fall somewhere in the middle so I started looking on page 4 or so. Nope. That was the 30-minute range. Okay … page 2? Page ONE? Wow.  Sixth?!

This is a HUGE accomplishment.

AND I got first in my age division. Not going to happen again considering in less than 2 weeks I’m going to be 25, which puts me in the 25-35 age range (ie. where a lot of the elites fall).

In case you’re curious, I’ve included the graph of the race (note that it drops off after I finish b/c I had to jog around the block to get my iPod to think I was done). 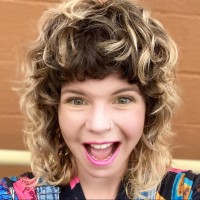 I’m a designer, writer, educator, and wannabe DJ who geeks music and spends most of my spare time making things and exploring outdoors.

I rescued a dachshund today.

(I also answer to chimes.)

I’m a queer, nonbinary woman. I’m a designer, multimedia artist, educator, and aspiring bass player. I geek music and spend most of my spare time making things and exploring outdoors.

Photo and hair by Miriam McNamara.